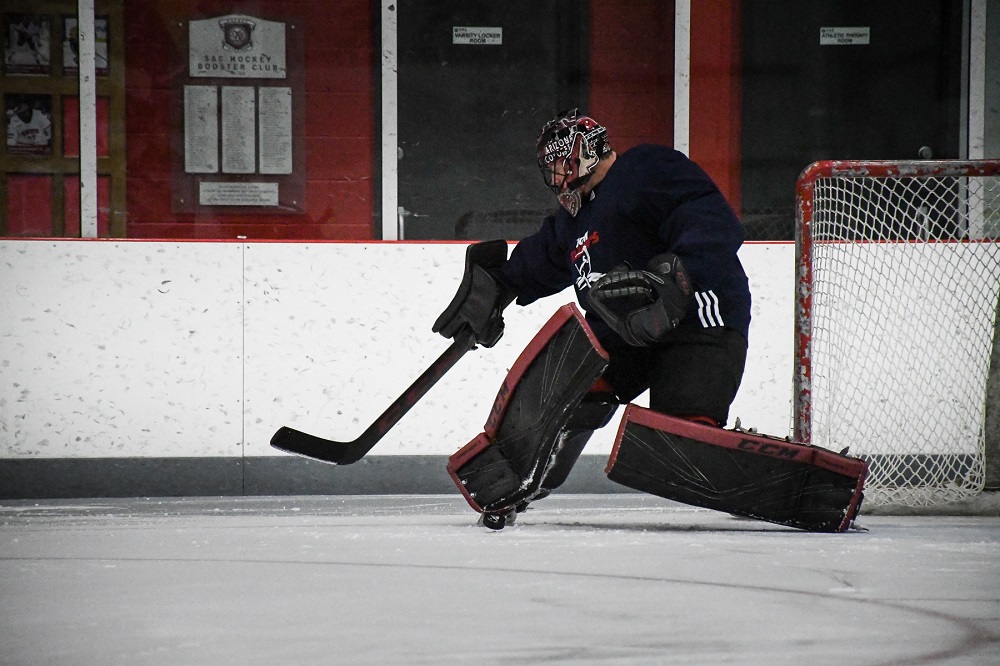 Adin Hill: The Making Of An NHL Prospect

Adin Hill is coming off of another stint with the Arizona Coyotes as both Antti Raanta and Darcy Kuemper were out with injuries. In 13 games played this year with the Yotes Hill has put up impressive numbers. Hill has a 2.62 goals against average and a .918 save percentage this season. Both Raanta and Kuemper have returned from injury which means that Hill is back with the Tucson Roadrunners in the AHL. We caught up with Adin to chat about his experience playing in the NHL and how his career is progressing so far.

Dave: You’ve played 30 games in the NHL so far in your career, and at the young age of 23. This should definitely give you confidence. What do you think about where you are at in your career right now?

Adin: I think I am in a good spot. The Yotes have two really good goalies, but I feel like I have given the coach the confidence to put me in when they need me. I’ve proven myself, so it is just a matter of time before I am back in the NHL

Dave: You were with the Yotes for a couple of months while Kuemper and Raanta were out with injuries. Now you’re back in the AHL. How do you approach being back in the AHL?

Adin: Approach wise (and Jon has stressed this to me) the key is having an every day approach. It doesn’t make a difference if I am starting in the NHL, backing up in the NHL, or starting in the AHL. I try to keep that same approach day in and day out. My goal is to make the most of every day on the ice and keep getting better.

Adin: The biggest difference is that every NHL team has their top 3 forwards, and top 3 defencemen, who are game changers. You need to be aware of when those players are on the ice because they are difference makers out there. I’d say that pretty much everyone in the AHL could slot into a 3rd or 4th line role somewhere in the NHL, but there are fewer of those difference makers in the AHL.

Dave: You’ve had a lot of success for a 23 year old. What do you think you need to get better at?

Adin: I need to be more patient and stay on my feet more. Part of that has been narrowing my stance. I’d say that 80% of the time I’ve fixed that and have a narrower stance, which gives me a better reaction time.

Dave: You’re a tall guy, the NHL website lists you at 6’6. Do you think your size has something to do with having to work on being patient?

Adin: It’s funny you ask that, because I wasn’t always this tall. When I first came to Jon I was only about 5’6, and my game was a lot different. I used to play more like Fleury, with a battle style, moving around a lot and more than I needed. As I grew, I worked with Jon on being calmer, and having a more narrow stance helps with that.

Dave: Calm is definitely a word I would use to describe your game. The pressure of the NHL doesn’t seem to get to you. How do you keep that calm and confident demeanour?

Adin: This has been how I’ve played for a long time. My focus is to let the play come to me, and keep the mindset that no matter what happens, I just need to focus on the next shot. Being calm also helps your teammates out, because if they are looking back at you between the pipes and see you have it together, it helps them stay even keeled.

Dave: There are a few goalies your age who are starting in the NHL. Do you ever look at those guys with envy?

Adin: No, I don’t actually. In fact I am more proud of them than anything. Take a guy like MacKenzie Blackwood for example. I train with him in the summer, I root for him, and want him to succeed. It also helps that he is a great guy off the ice.

The same goes for Carter Hart. I spent a lot of time playing against him in the WHL. We had a bit of a rivalry, but I like seeing him succeed and I hope he can keep it going.

Dave: What did you work on this summer to prepare to be an NHL goalie?

Adin: Narrowing my stance was a big adjustment. Since working on that my movement has been a lot better. I’ve also moved my hands back in my stance to be more relaxed. I felt like I was stabbing at pucks before and these adjustments have helped a lot.

Off the ice, I worked on vision training with an optometrist in Alberta who specializes in tracking. He had me do a bunch of different exercises that simulate games, and it has helped me read the play better. After about a month and a half of vision training I noticed a big difference.

Dave: how do you feel that technology has helped goalies train and get better?

Adin: Some of the technology that is used is super tacky. I’ve never been a fan of coaches bringing gimmicky props onto the ice during training. That said, off the ice, things like vision training and video review have helped a lot. The same thing goes for my workouts and training options. The training options today are leaps and bounds from where they were even 10 years ago.

Dave: Do you have any advice for what young goalies should do in the off season?

Adin: If you are a young goalie out there, you should take a break from hockey in the summer. Be a kid, play another sport! I played almost everything growing up. Doing that helps make you a better overall athlete, and helps prevent burning out. Being on the ice all summer means that you are using the same muscle groups over and over again. Playing different sports and doing different things works different muscle groups, builds coordination, and keeps you eager for when you are on the ice.