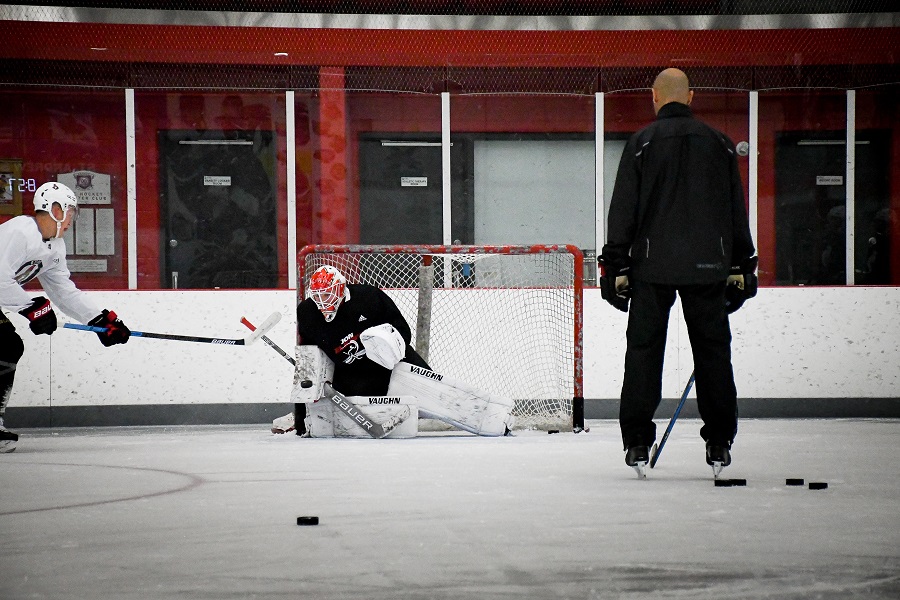 Elkin goalie MacKenzie Blackwood had a stellar weekend with back to back wins. Blackwood, on Friday evening at home in New Jersey, made 38 saves in a 2-1 win against the Pittsburgh Penguins, posting an impressive .974 save percentage. Penguins forward Jake Guentzel was asked about Blackwood’s performance in the post game media scrum, and said “He played really well tonight. He’s big, so he gets a lot in the way of pucks.” Notably, the win came against fellow Elkin goalie and Thunder Bay native Matt Murray.

Blackwood followed that up with a 31 save performance the following night in Montreal in a 4-3 overtime win over the Canadians. After the weekend Dave caught up with MacKenzie to ask him about the weekend, playing back to back games, and what it was like to battle it out against Murray.

Check out this video for highlights from the weekend:

Dave: Both you and Murr are from Thunder Bay, and train with Jon. What’s it like to play against someone you know from home and that you’ve trained with? As you developed what were some things you learnt from Murr along the way?

Blackwood: “I didn’t actually meet Murr until we were a little older. He took me out for coffee as a younger guy, and I really appreciated the gesture. In terms of playing against him, I would say it is a little different when you are playing against people you know, and someone who is your friend. That said, the game itself is always the same. They might be your buddies, but how you approach the actual game has to stay the same regardless of who is on the ice with you.

The biggest thing I have learnt from Murr is his professionalism. He is mature beyond his years, a true professional in how he carries himself (both on and off the ice). He’s a pro through and through, and I’ve definitely learnt the importance of that from him.”

Dave: Back to back games can always be tough on a goalie, what are the keys to making sure you’re prepared for 2 games in 2 nights?

Blackwood: “I actually haven’t played back to back that much. I did once earlier in the season, playing Philly the first night and Carolina the second. There was a lot to learn from that first experience, with the biggest takeaway being that your tiredness is mostly mental.”

Dave: Not only did you have back to back games, one was on the road, and one was at home. For you, what are the big differences between playing on the road, and playing in front of your home crowd?

Blackwood: “Playing at home can be nice, because you get to prepare for the game in your own rink, your own stall in the room, your own net, and sleeping in your own bed. On the road can be fun though, because you’re playing in a new arena, and the situation can test you by being a little less comfortable. Most of those differences are only relevant in the lead up to the game. Preparation wise its all the same regardless of whether or not you are at home, or on the road.”

Dave: A lot of commentators talk about how the Bell Centre in  Montreal can be one of the hardest rinks to play in. Does an opposing team’s home crowd help build you up for a big game, or is it something you tune out?

Blackwood: “I love playing in Canadian cities, and big hockey markets. Those rinks always have a great atmosphere, and I really love playing in those tough buildings. The fans in a city like Montreal might be on you, but at the end of the day you’re playing hockey, so it’s hard to complain.”

Dave: You beat Montreal in OT, how do you prepare yourself for a period of 3 on 3? What makes overtime different than play during regulation?

Blackwood: “3 on 3 overtime is a wild arcade version of a regular hockey game. Fully expect to be involved, and have fun battling it out. These overtime periods are filled with Grade A chances at both ends, and you know it isn’t going to be pretty hockey. I just try and get myself ready to make the big saves I need to make to give my team the chance to win.”

Blackwood: “One thing I did well was staying mentally engaged, and staying in that zone through all of the ups and downs. I did a great job of staying in the moment. In terms of what I could have done better, I could have done a better job of slowing things down. There were times where I could have taken the extra whistle, especially when the other team was pressing. What I learnt is that regardless of how tired you are, you have to block out the fatigue. If you block out the mental tiredness, the body will follow.”

Dave: Thanks for chatting with me, and congrats on a great weekend