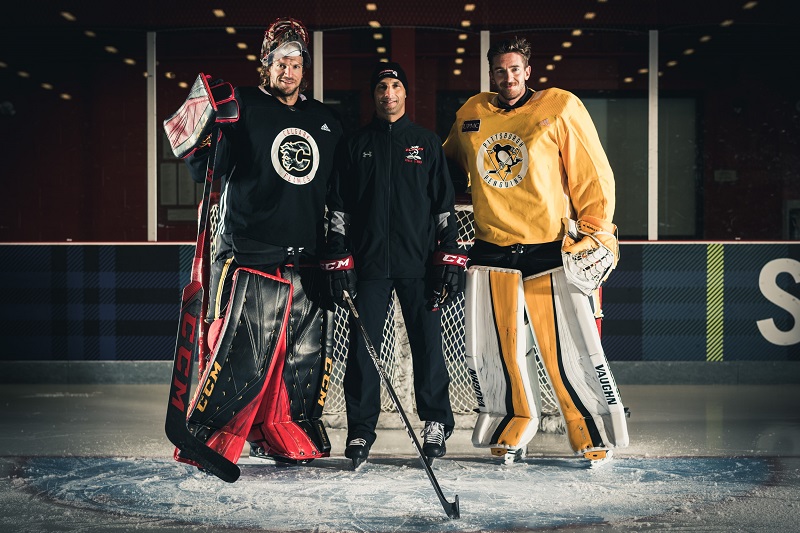 Smith Vs Murray Ends In OT, After 80 Shots

On November 2nd, two Elkin goalies (Mike Smith and Matt Murray) faced each other when the Edmonton Oilers arrived in Pittsburgh to play the Penguins. To say that the game was a goalie battle would definitely be an understatement. Smith made 51 saves in a 2-1 overtime win, sporting a .981 save percentage. Smith would also be recognized by the NHL as their Third Star of the Week. Murray, despite not getting the win, played incredible as well, making 26 saves on 28 shots, with a .928 save percentage.

After the game, Dave caught up with both Smith and Murray to ask them a few questions, get their thoughts on the game, and talk preparation.

Matt Murray: “I watch video in advance for tendencies, to figure out what they particularly do well. With that I create a game plan for how to deal with situations that are likely to happen. For example, McDavid’s speed gets him a lot of wide angle breakaways, which is something you have to be ready for.”

Mike Smith: “To be honest, there isn’t much that I do differently from game to game. One of the biggest things I have learnt over the course of my career is that there are elite players on every team, and that you have to be as prepared as possible every night. I try and keep it consistent, keep it the same, and try to avoid changing things up when we’re playing those high end guys. That said, I am certainly aware of when guys like Crosby and Malkin are on the ice. They can change the game on you in the blink of an eye.”

Dave: You both train with Jon, and have actually trained alongside each other. What is it like to play against someone you train with?

Matt Murray: “I actually don’t think about it too much in the moment. I just worry about my game and let the rest take care of itself.”

Mike Smith: “I have a lot of friends in the league, and I really do try to avoid getting wrapped up in who I’m playing against. That’s true for both your friends, and your enemies. I have a lot of respect for Murray; he has done incredible things in this league, with his two Cups, but at the end of the day I just focus on the things I can control.”

Dave: The game ended in overtime, how do you guys prepare yourselves before a big overtime period like that?

Matt Murray: “The biggest challenge is mental, trying to stay calm in a crazy overtime period. 3-on-3 hockey is definitely different; it produces a lot of chaos, and it is really important to calm the nerves and stay calm in a chaotic situation.”

Mike Smith: “The key here is saying even keel. In OT, just try to make that big save that is going to give your team a chance to win the game. As a goalie, it is extremely important to keep things calm, especially in OT where you are going to have breakaways, 2 on 1s, and even the occasional 3 on 0.”

Matt Murray: “One thing I did well was to keep my composure. One thing I want to improve on is dealing with traffic in front of the net, and one thing I learned was that puck handling can really be a big difference maker in a game.”

Mike Smith: One thing I did well was track the puck. From the very start of the game I was seeing the puck well, which really helped my rebound control. One thing I could have done better is my depth on the goal that they did score; I could have stepped out a little further on him. One thing I learned, or one takeaway from the game, is that you have to be prepared for everything. On any given night you could end up facing 50+ shots.”

Dave: Thank you both for sitting down with me, and congratulations to you both on an incredible game. I know I’ll be watching when you face off against each other again on December 20th.