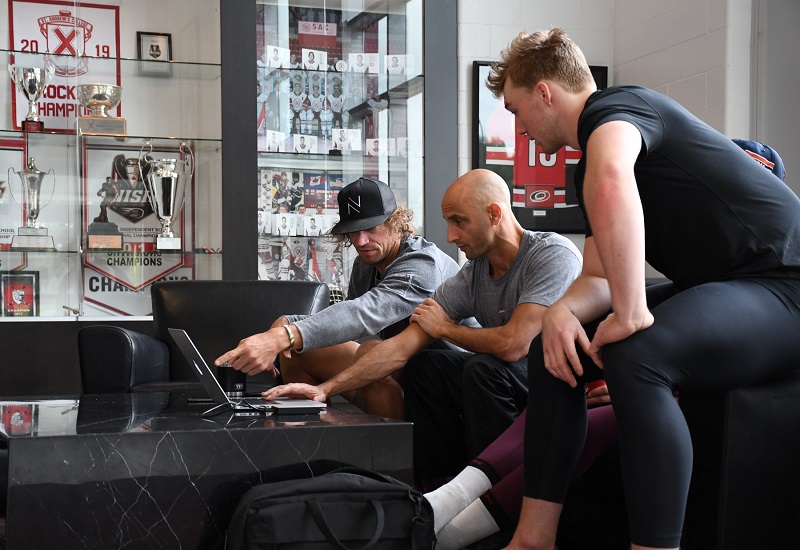 How The Game Has Changed: A Conversation With Jon Elkin

Hockey and goaltending have changed a lot over the years. One thing that has remained constant is Jon’s commitment to the game, to the position and to helping goalies reach whatever their next level might be. With some reflection on how the game has developed, I figured it would be best to interview Jon directly on coaching at an elite level, how the position has evolved over the years and how his approach to the game has impacted goalies at all levels.

Jon started his goalie school part time in Montreal at the age of 16. In 1992, he moved to Toronto to operate full time starting with just one student. Today, it is one of the largest and most respected goalie schools in the world. As his school and reputation grew, Jon landed his first NHL coaching job with the Calgary Flames over 20 years ago. Between then and now, he’s worked at the NHL level with the Arizona Coyotes, a multitude of OHL teams, and is currently the AHL goalie coach in the Leafs organization with the Toronto Marlies.

Jon has worked with goalies of all ages and from all over the world: a fair number of whom have gone on to play in the NHL. Former NHL Rookie of the Year Andrew Raycroft was one of Jon’s first students to make it to the NHL. Presently, Edmonton’s Mike Smith, Pittsburgh’s Matt Murray and New Jersey’s MacKenzie Blackwood are NHL goalies who have trained with Jon since they were kids.

Here’s my interview with Jon and our discussion about how the game has changed over the years, and the complexities of being a goalie in today’s game.

Dave: It has been over 20 years since you first started coaching at the NHL level. How has being a goalie changed over the years?

Jon: “To say the game has changed would be an understatement. When I first started coaching, back in the 80s, goalies were still making skate saves and two pad stacks. Luckily, that style of goaltending was replaced by the butterfly technique.

Dave: What was the pushback like when goaltending moved to the butterfly technique? Was there a lot of resistance?

Jon: “For goalies, there wasn’t much pushback at all. They immediately got it, understood it, and saw the impact it had on their game. For my students, that transition was pretty smooth. That said, there was a ton of resistance from coaches. Coaches at that time had difficulty understanding why goalies would go down with both knees. They were stuck in the mindset that going down meant exposing the upper part of the net. These coaches failed to grasp that the combination of using the butterfly with being patient meant that goalies could cover both low and high shots. Luckily there isn’t pushback on that anymore.

Dave: Other than the butterfly, what else were coaches resistant to?

Jon: “Another big hurdle with coaches was getting them to understand the importance of staying at the top of the crease as opposed to challenging shooters way out in the white ice. The old mantra used to be that the more goalies challenged the shooter, the more net they took away. The problem with that approach was that it eliminated a goalie’s ability to move laterally on passes and exposed goalies to second chances. I remember coaches berating young goalies for not challenging enough. As goalies started to hold their position at the top of the crease and move laterally to make saves on cross ice passes that criticism went away.”

Jon: “In the 90’s a lot of goalies got into the habit of simply blocking the net. I always encouraged my goalies to avoid that and focus on utilizing the technique while still being reactive. My emphasis has always been for goalies to use the butterfly combined with athleticism and patience. Avoiding that pure blocking trend is what helped me stay ahead of the curve and it helped my goalies along the way”

Dave: Can you think of any examples of what this technique transformation looked like?

Jon: “The most prominent example I can think of is Andrew Raycroft’s rookie season in Boston. Andrew was able to win the starting job in Boston over an established veteran because he was able to move laterally to make first and second saves. His ability to move laterally, under control and without sprawling, gave him an edge over other goalies who were still in the habit of over-challenging and sprawling to get to rebounds. That remarkable season he had is a very good example of how a more controlled and square type of game could impact a goalie’s performance.”

Dave: In your view, how have shooters developed and how has that impacted how goalies need to play?

Jon: “The game has opened up and is way faster giving players more opportunities to demonstrate their skill. Shooters are so good today. They have the ability hold on to pucks, change angles and they shoot better. The improved skill is why it is more important than ever for goalies to be good at three things: patience, moving well on one’s feet and reacting. Being patient and maintaining one’s edges is especially important because it allows goalies to remain reactive and athletic, giving them the ability to adjust to multiple scenarios.”

Dave: How has off ice training changed over the years?

Jon: It is night and day; from warming up to cooling down and recovering. Goalies are better athletes due to the resources available to them off the ice. Another factor that sticks out is the mental component. Goalies today are better educated in dealing with the mental side of the position: learning how to maintain focus, deal with distractions or how to move on from mistakes with a growth mindset. Today we have goalies, especially at elite levels, working with mental skills coaches and psychologists, which allows for healthier minds. It is important for goalies to own the right mindset, to breathe properly, to maintain a sense of calmness and to keep their composure. This is very important; we focus on that in our training.

Dave: To wrap this up, what other professionals do you lean on when working with elite goalies? What else goes into creating a training regimen for a goalie at that next level?

Jon: “I lean on a lot of professionals from a variety of different areas. We have strength and conditioning coaches to help with physiology. We have trainers who work explicitly on core stability, which has a huge impact on how one moves around the net. I work with manual therapists who manipulate muscles and tissues to ensure that they fire in the right patterns. If muscles are inhibited then other muscles compensate and that limits movement efficiency. I’ll suggest mindfulness training and experts such as psychologists or psychiatrists when needed. Being an elite level goalie can be quite complex, but success ultimately comes down to being able to execute on the information given to them. There is a lot more to it than just stepping on the ice and doing the work.”