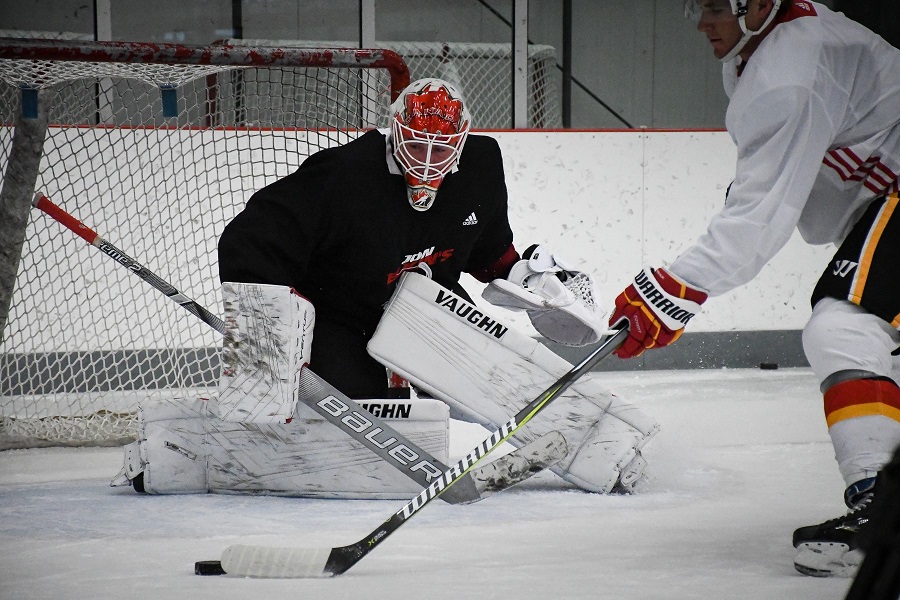 MacKenzie Blackwood is coming off a career weekend, with back to back shutouts and his first career NHL assist. Last Thursday Blackwood made 46 saves in a 5-0 win in Philadelphia against the Flyers, while also assisting on Damon Severson’s short-handed goal. Two nights later Blackwood blanked the LA Kings making all 37 saves in a 3-0 win at home.

For highlights from the two games, check out the highlight video below.

Dave sat down with Mac to chat about his back to back performances and to catch up on how the season has gone thus far.

Dave: Obviously this was a career weekend for you, with back to back shutouts. That said, another milestone was your first NHL assist. Did you know right away that you got the assist?

Blackwood: I actually didn’t know I got the assist until they announced it in the rink. At first I think I was admiring the play that Severson made to get up the ice that fast and score. Definitely a nice surprise to hear my name in the goal announcement.

Dave: How would you describe your ability to play the puck?

Blackwood: Playing the puck has always been one of my weaker areas. Jon is great at teaching it, but it has never come naturally for me, so I really have to work on it. I can handle the puck well, but reading the play is much harder. I’ve come a long way from where I once was, but there is still a lot to work on.

Dave: How do you work on your ability to read the play?

Blackwood: It is important that I get more comfortable getting the puck off the wall and spinning to face up ice. I have to make sure I am facing up ice right away to give myself more time to read the play. Another small detail is knowing what hand my defensemen are, so that I’m making passes on their tape on not in their feet.

Dave: Why is getting better at playing the puck important?

Dave: This season has had some ups and downs, both for you, and for the team. How do you think the season has gone so far?

Blackwood: Personally, this season has been a great learning experience, mostly because I have played a lot of hockey. I’ve almost played 40 games already, so I am definitely in a fortunate position. I’ve learned a lot in terms of where I need to grow to be a better goalie.

Dave: where do you think you need to grow to be a better goalie?

Blackwood: Well, looking back on the season so far, there have been a lot of positives, even though we’ve had some tough bounces as a team. One of the keys to a season like this is staying present in the game. Sometimes you get bad bounces and games aren’t going to go the way you want them to. When you have those ups and downs, it is important to be able to handle those situations by focusing on the next save, regardless of the score. Trying to make the best out of a worst-case situation. Goaltending has so many technical aspects, but the mind side of the game is super important. You can have all of the technical aspects down, but if you have mental breakdowns it is all downhill from there. That is something that I have gotten much better at, but also something that needs improvement. When you’re 23 there is always a long way to go.

Dave: What are two things you specifically need to improve on?

Blackwood: Two things that jump out are playing the puck (making smart plays), and consistency (being dialed in all the time). That said, just because you might be particularly good at something doesn’t mean you can neglect it in practice. You have to train all aspects of your game.

Dave: If you were to rate your performance so far, with 10 being your max potential, what number are you playing at in your career?

Blackwood: I think I would put myself at a 6. I’m happy with how things have gone so far, but still want to progress a lot more.

Dave: Lastly, you don’t have any fancy colours or patterns on your gear, and your helmet is fairly simple. Why is that?

Blackwood: In junior I tried out colourful pads and different combinations, but I really do love the look of a classic set of white pads. A lot of guys love the fancy stuff, but for me nothing beats a fresh set of white gear. As for the helmet, some guys put a lot of creativity into it, but that hasn’t ever been my thing. I prefer a smart, clean design on the bucket. As long as I have something on my head, I’m good.